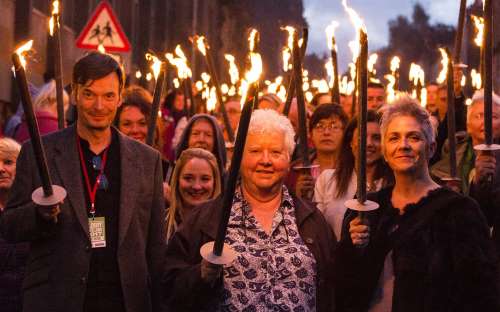 Bloody Scotland 2017 was our biggest and best yet. Walking down from Stirling Castle in a sea of flaming torches with Ian Rankin, Val McDermid and Denise Mina at our head, celebrating 30 years in the business for Ian and Val, and Denise as the latest winner of the McIlvanney prize, was a magical moment for Alex Gray and myself.


Here was the result of an idea, born nine years ago, in all its wonder.

The conception, birth and success of the Bloody Scotland festival is, like all good stories, entirely dependent on the characters involved.

For those of you who don’t know the whole story, let me give you the bones of it.

The idea for a Scottish Crime Festival was born in Lincoln, England at a Crime Writers’ Conference in 2009 famously after a couple bottles of Prosecco. At its conception were myself, Alex Gray and Alanna Knight. The question which prompted it… why, when we have such a wealth of crime writing talent in Scotland, do we not have our own festival?

Having the idea is the easy bit of course. After that you have to persuade other people that it is a great idea. Fortunately that wasn’t difficult. The first to join our trio was Jenny Brown, our Chair for the past six years. This was swiftly followed by Gordon Brown. Alex came up with the brilliant name, Bloody Scotland, and we were on our way.

Our initial committee was formed and we lost and found members en route. One of the most successful decisions we made in those early years, apart from the name, was to make Stirling our home, which led in turn to us welcoming Stirling-based Craig Robertson onto our committee.

And at the heart of our project was always the late great William McIlvanney, who had inspired us all to become crime writers in the first place.


As I said, it’s all about character.

We launched in 2012 after three years planning and hit the ground running and we have gone from strength to strength, thanks to the passion and commitment of all our past and present Board Members and of course, our current and former festival directors, Bob McDevitt and Dom Hastings. 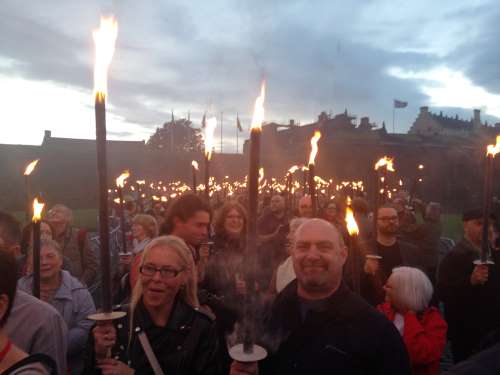 However, as Alex and I walked from Stirling Castle to the Albert Hall, one thing was clear. Bloody Scotland now belongs to everyone – our Bloody Scotland team (including our sponsors), the wonderful authors, the readers, the bloggers, the volunteers, and of course the welcoming people of Stirling, of Scotland and beyond.

Reading the Past – Imagine the Future  (Bloody Scotland book 2017)
Posted by Lin Anderson at 08:07