Crime in the Spotlight at Bloody Scotland

Investing in the future of Scottish crime writing (our other national export) by showcasing some of our emerging crime writers is what Bloody Scotland is all about.

We love to hear new voices emerging on the crime writing scene, and to help you, our readers, catch a glimpse of the future.  I’m delighted, as co-founder of Bloody Scotland to promote Crime in the Spotlight a great opportunity for new writers to meet their audience, and for you the audience to meet the new writers.

To celebrate Paths of the Dead being shortlisted today for the 2015 Scottish Crime Book of the Year, the first book in the Rhona MacLeod series Driftnet is now available FREE as an ebook (for 5 days only).


The boy did not expect to die

In DRIFTNET the very dangerous worlds of paedophilia, politics, and the Internet are skilfully linked together .... It simply makes your skin crawl. Ms Anderson's brilliant debut leaves you hoping for a sequel soon. ... The Independent

One of the 20 Scottish books everyone should read ... The Scotsman (about Driftnet) 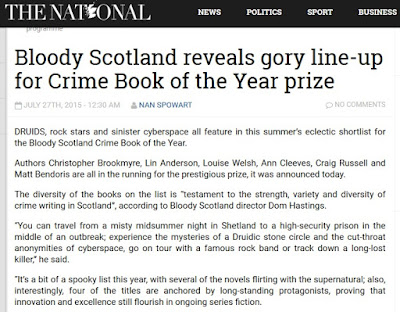 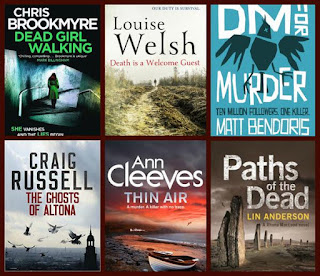 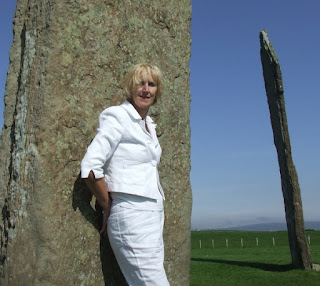 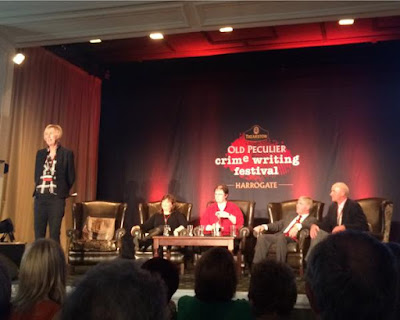 I’m just back from Harrogate and the 2015 Old Peculier Crime Festival, to give it it’s proper name. Harrogate is a Queen among crime festivals, in my opinion, and it was Harrogate that inspired Bloody Scotland. Back seven years ago when Alex Gray and I came up with the idea of a Scottish International Crime Festival we knew that we had a lot to live up to. Back then Val McDermid one of the founders of Harrogate, gave us some very good advice and encouragement which gave us the courage to have a go. Three years later Bloody Scotland was born, and it is now in its fourth year.
Travelling to Harrogate this year again, I was struck by how easy they make it all look. Knowing very well the work involved behind the scenes, I am more than a little impressed. When we first launched Bloody Scotland, Ian Rankin said, Scandinavia doesn’t have better crime writers than Scotland, it has better PR. Bloody Scotland was created to do just that and it learned the ropes from the best in the business … Harrogate. 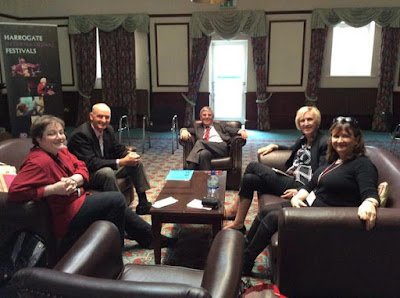 Atmospheric, welcoming, friendly, funny, thought provoking and a wonderful celebration of crime fiction, Harrogate this year provided me with my dream panel to chair. As a forensic fiction writer, I was given access to four of the best forensic minds in the business. Lorna Dawson, Principal Soil Scientist at the James Hutton Institute, Niamh Nic Daeid, Professor of Forensic Science and Director of Research at the Centre for Anatomy and Human Identification at the University of Dundee, Professor James Grieve, former Senior Lecturer in Forensic Medicine and a Police Forensic Pathologist, and Martin Hall, Research Entomologist at the Natural History Museum (Maggot man!). What a line up.

700 people in the room agog with interest and eager to ask questions. We could have been there for at least another hour. I’m always impressed by readers’ knowledge and desire to know more about the forensic processes involved in crime detection, and the fact that they know that CSI is not reality.

So a big thank you to all involved and in particular Anne Cleeves, the Chair of the committee this year, as I believe I have Anne and Val to thank for my dream panel.

With Forensic evidence as a major theme in my novels and those of Val McDermid, we have a Forensics event together at Bloody Scotland in September, so book tickets now to hear our 'Whodunnit?' discussion.