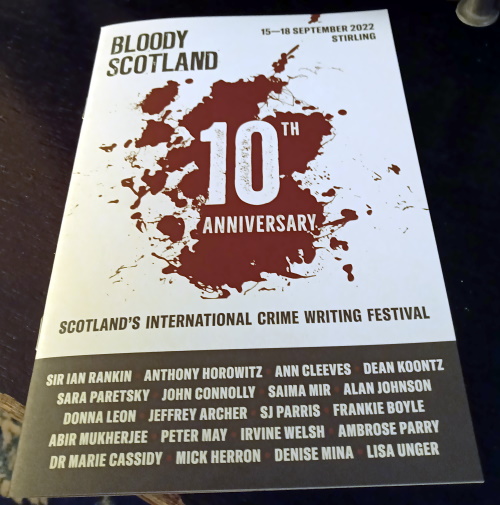 Today saw the launch at the Golden Lion Hotel in Stirling of the tenth-anniversary 2022 BLOODY SCOTLAND programme. This year's programme will be the biggest ever, with events across four days (15th-18th September 2022), and will be a combination of both the normal Stirling-based events, plus the additional online element that was first introduced in 2020. Tickets are now on sale via the BLOODY SCOTLAND website ( http://bloodyscotland.com/events ), so please book now and join us in September.

My own BLOODY SCOTLAND event is 'The Party's Over' at 18:00 on Friday 16th September, when I am appearing with Chris Brookmyre and Claire Mackintosh, and will talk about my new stand-alone thriller THE PARTY HOUSE.
Book tickets for 'The Party's Over' here:
https://bloodyscotland.com/events/the-partys-over-lin-anderson-chris-brookmyre-and-clare-mackintosh/ 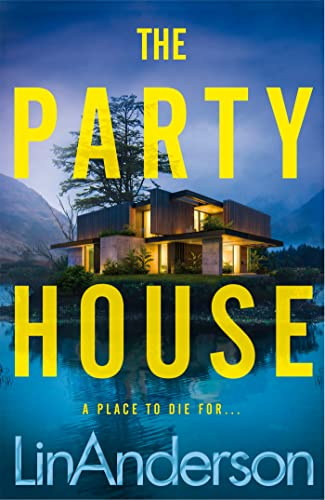 Lin Anderson Shortlisted for CWA DAGGER IN THE LIBRARY 2022 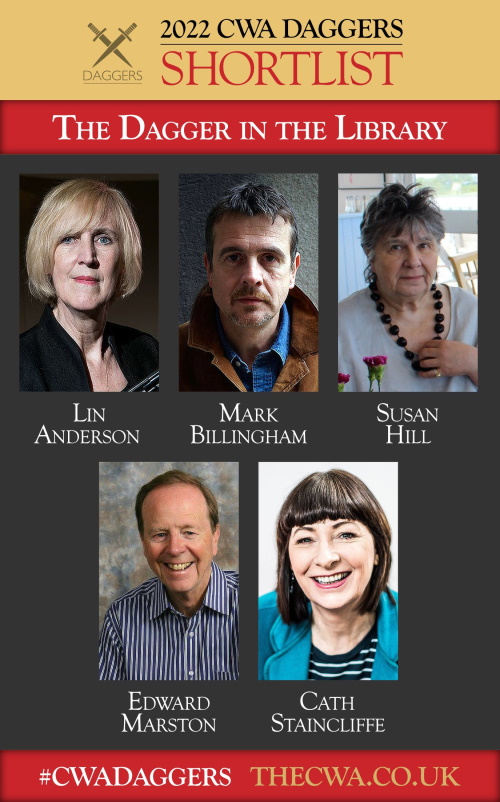 I'm delighted to have made it onto the Shortlist (in great company!) for the 2022 Crime Writers Association 'Dagger in the Library' award.

The Dagger in the Library is a prize for a body of work by an established crime writer which has long been popular with borrowers from libraries. It also rewards authors who have supported libraries and their users.

The Dagger in the Library is awarded to an author writing in Britain and nominated by libraries in the UK.

Lin Anderson Longlisted for CWA DAGGER IN THE LIBRARY 2022 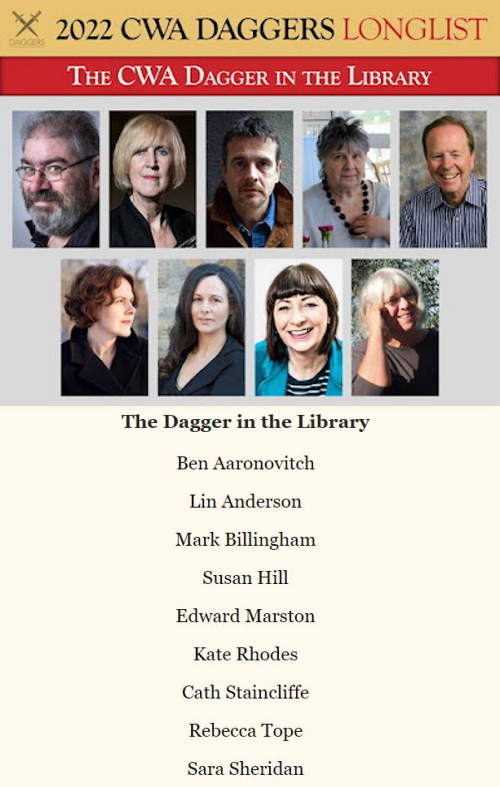 I'm delighted to be on a great Longlist for the 2022 CWA 'Dagger in the Library' award. The CWA Dagger Long lists were announced yesterday evening at the CWA Gala Dinner.
~o~
Posted by Lin Anderson at 14:50 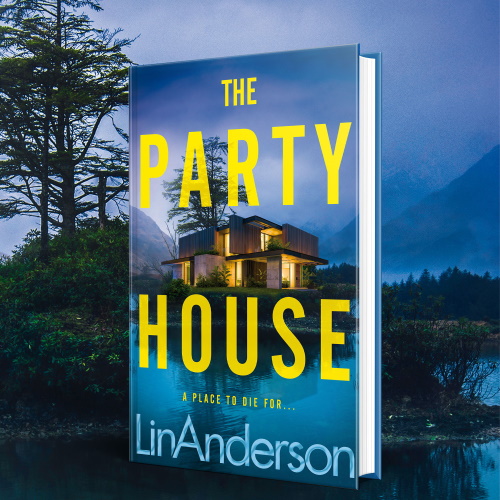 It's COVER REVEAL DAY for my new stand-alone thriller THE PARTY HOUSE!

What if a murder happened in your own small community? What if you became a suspect? Or someone close to you did?

That idea has intrigued me for some time, and I decided to take a short break from the Dr Rhona MacLeod series to explore it in the psychological thriller The Party House.

The story takes place in the fictional highland village of Blackrig. Just coming back to life after a pandemic in which five children and their community nurse died, the villagers are furious to discover that the much despised Party House, is to be re-opened, despite the fact that it seeded the deadly virus into the village in the first place.

When a group of local youths act out their anger by destroying the Party House hot tub, the body of missing teenager Ailsa Cummings is discovered in its foundations and the village must relive both her disappearance of five years ago, and now her murder.

This ignites old suspicions, animosities and fear among the villagers, especially the men, who’d known Ailsa at the time of her disappearance. All of whom had become suspects in the enquiry.

Men like local Greg Taylor, whose new partner is Londoner, Joanne Addington, whom he met on a recent business trip. When questioned by Joanne about the missing girl, he angrily refuses to discuss the case.

Joanne, perturbed by his reaction, questions how well she knows Greg, and whether it was wise to move in with him. Then again, he’s not the only one with secrets in their volatile relationship.

When a police team arrives to excavate and forensically examine the remains, they find a resentful and angry population who, it seems, would prefer the past to stay buried.

Rhona MacLeod doesn’t feature in The Party House, although forensic science does.

Rhona will be back in 2023. We first met Rhona in Driftnet in 2003, so next year which will be the 20th year of Forensic Scientist Dr Rhona MacLeod. 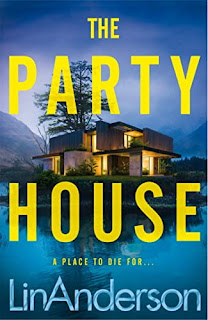 Due for publication on 4th August 2022, The Party House by Lin Anderson is a deeply atmospheric psychological thriller set in the Scottish Highlands, for fans of Lucy Foley, Ruth Ware and Sarah Pearse’s The Sanatorium. 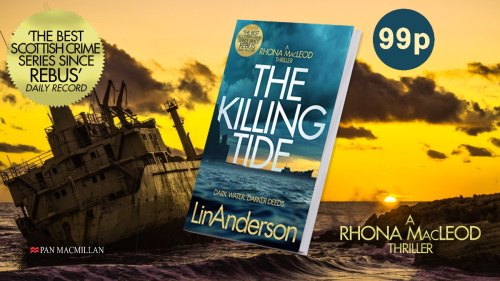 THE KILLING TIDE is on a 99p Kindle Monthly Deal for April 2022. 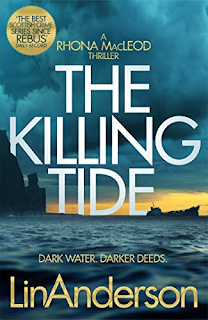 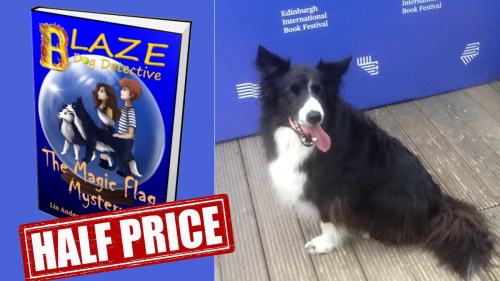 Special Offer for Book Week Scotland 2021
During Book Week Scotland 2021 all orders for signed-and-pawed copies of THE MAGIC FLAG MYSTERY are half-price at £5 inc. P&P (normal price £10 inc. P&P) per copy.
Offer closes at midnight on Sunday 21st November 2021.
To order, please send £5 via PayPal to finance@dunedinmedia.co.uk and put the delivery address and any dedication required in the PayPal notes.
All orders will be sent off by First Class Post during w/b 22nd November.
~o~
Posted by Lin Anderson at 00:06 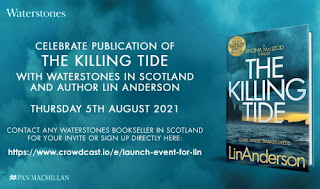 Celebrate publication of THE KILLING TIDE with Waterstones in Scotland and author Lin Anderson at a FREE online event on Thursday 5th August 2021 at 7:00pm BST.
TO REGISTER FOR THE EVENT:
Simply click on the Crowdcast link below and it should take you directly to the event page. Once you’ve registered for a free ticket, you will receive a confirmation email.
https://www.crowdcast.io/e/launch-event-for-lin
Lin Anderson will be in conversation with Angie Crawford of Waterstones Scotland.
Waterstones and Lin Anderson look forward to discussing and celebrating the publication of THE KILLING TIDE with you on 5th August!
~o~
THE KILLING TIDE REVIEWS

'The latest Rhona MacLeod novel is a cracking story told at breakneck speed' - The Scotsman
'Anderson never disappoints with her Dr Rhona MacLeod series' - The Sunday Post
'A fascinating examination of how police and journalists determine a horrifying truth' - Scotland on Sunday
Related Links:-
More about The Killing Tide
Posted by Lin Anderson at 10:31

The Party House by Lin Anderson is a deeply atmospheric psychological thriller set in the Scottish Highlands, for fans of Lucy Foley, Ruth Ware and Sarah Pearse’s The Sanatorium.