Scottish Crime at a Confluence of Cultures

There are 14 million people living in Kolkata, and around 5 million living in the centre of the city. The Kolkata Book Fair is the biggest in the world, with 2.5 million people visiting it to buy books as well as to attend the festival events.

It’s hard to believe those numbers until you step inside one of the numerous entrances and see the hoards of enthusiastic readers who throng the multitude of bookshops. Indians love reading and all age groups were in the packed book tents.

My favourite memory was of a boy of about ten who had chosen his book from a selection of classics. Clutching it to his chest like a prize possession he was approaching the pay desk with a broad smile on his face. The book he had chosen was Ivanhoe by Sir Walter Scott – not the easiest of reads in English for any ten year old, but Indians love the classics as well as contemporary fiction. 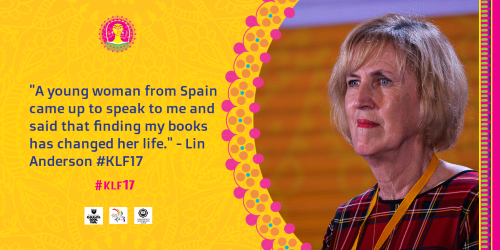 Many people speak five or six languages including English. In India there are 1000 languages spoken. A melting point for different cultures, Kolkata is the most diverse city I’ve ever visited. Its inhabitants are aspirational and see reading as the doorway to knowledge about everything.

We were involved in three events at the festival. Jenny Brown our Bloody Scotland Chair spoke at a translation event. Crime books are very popular in India in particular Sir Arthur Conan Doyle’s Sherlock Holmes series. However we did spot books by Ian Rankin and Alexander McCall Smith too. 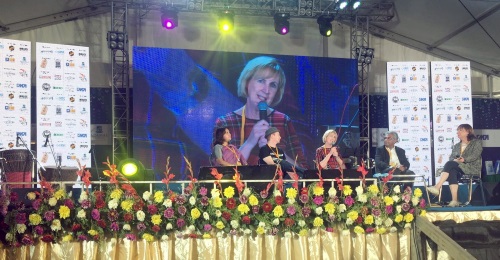 The aim of our visit was of course to promote Bloody Scotland and Scottish crime writers in general. At our second event, Bloody Scotland took centre stage with Doug Johnstone and myself plus two Indian crimewriters, Monabi Mitra and Krishnendu Mukhopadhyay, chaired by Jenny Brown. It was a lively and well received event. We even managed to teach them a few words in Scots. 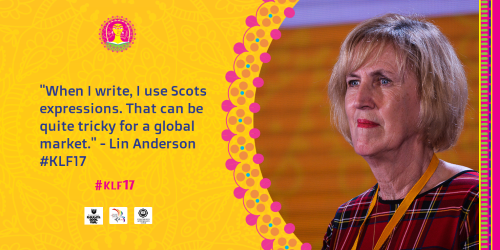 The third event I was involved in was entitled Who Are My Readers.  The six person panel included Egyptian lecturer and writer Khaled Alkhamissi, Vivek Shanbhag who writes in Kannada (one of India’s languages), poet and dramatist Nishi Chawla and Natalie Holborrow from Wales who is a poet. 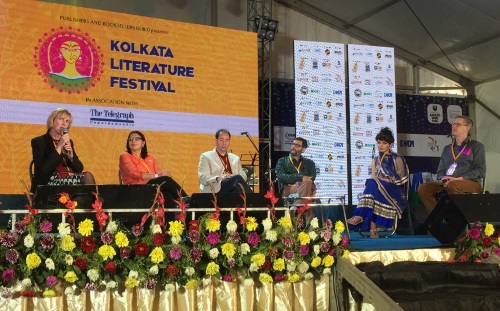 It was chaired by Denes Gazsi, Assistant Professor of Middle Eastern Languages at the university of Iowa.  It was a fascinating discussion during which I learned that over 75% of people in Egypt are under 25 years of age, all potential readers.

As well as the festival itself, Doug and I were involved in the British Council outreach programme. We visited the Shri Shikshayatan Girl’s school where we gave a talk to seventy eager readers. I can honestly say we’ve never had such informed and searching questions about being a writer and how to tell stories.

Like Scotland storytelling is very much a part of the Indian culture. At the end we were treated to the Indian version of Auld Lang Syne, beautifully sung by the girls… I think Robert Burns himself would have been delighted. 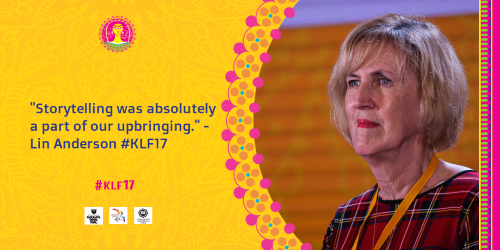 Perhaps my most abiding memory will be of our Confluence Of Cultures walking tour of old Calcutta. Kolkata has witnessed many more cultures in its past than most other cities have in our globalised present.

Communities of Chinese, Parsis, and Armenians who gave the city its oldest surviving Christian church, live alongside Anglo-Indians, Muslims, Marwaris, Biharis and the many more that made this city a great melting pot of diverse cultures.

One interesting fact I learned was that India was the only country that did not persecute the Jews.
It was these immigrants that made this great city bringing their knowledge, skills, literature, and cultures to make Kolkata the City of Dreams.