Would you recognise your own son? - How a crime series began with DRIFTNET

The boy did not expect to die are the opening words of Driftnet, the story that launched the Rhona MacLeod series. It opens with Rhona, a forensic expert, arriving at a murder scene only to find that the teenage victim looks so like her, she thinks he may be the son she gave up for adoption seventeen years before.


At the time of the Dunblane school massacre (where 16 primary school pupils and a teacher were shot dead by Thomas Hamilton), I was a computing teacher in a secondary school in Edinburgh. When the terrible news reached my school, all anyone on the staff wanted to do was take their own children home.

I too had a small child in the adjacent primary school, but couldn’t take him home, because there was an after-school event for staff on the subject of child protection, and there was a social worker from Glasgow coming to talk to us.

That talk included information about three paedophile rings they suspected were working in Glasgow, and how these rings had just found the Internet.

That terrible murder of children, coupled with that lecture left an indelible mark on me.

Two other things combined with that memory to create the story of Driftnet.

My father (already deceased) had been a CID officer in Greenock police force. He had three daughters who he worried about a lot. One big fear was that he might turn up at a scene of crime and discover one of his daughters was the victim.

The third and final influence which helped create the story, was the revelation around that time that former MP Clare Short had had a child she gave up for adoption. She revealed this when her son came looking for her in his thirties.

Rhona finds out quite quickly that the boy is not her son, but the fear that he might have been drives her to start searching for her son. It also makes the death of the teenage victim seem more personal, and Driftnet sees her search for her son and the killer run in tandem.


The killer is watching her, as much as she is seeking him, and the clash of her personal and professional lives created the character Rhona MacLeod.

I had no idea when I came up with that premise and character that Driftnet would be an immediate best seller, and would be the first in a series now running to eleven books and a novella, with the the twelfth book Follow the Dead now available for pre-order on Amazon. 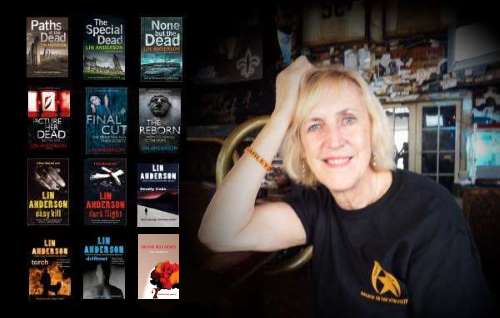 I often think that Rhona MacLeod found me, rather than the other way round.