FINAL CUT - The dead tell her their secrets 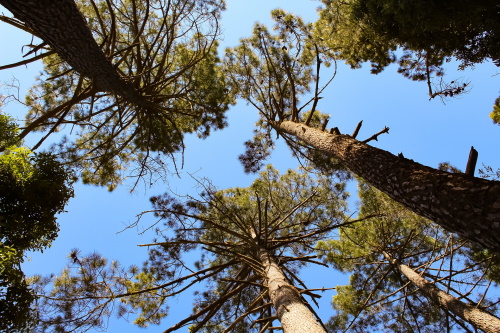 My home village of Carrbridge is fortunate in being surrounded by amenity woodland, mostly pine trees and blaeberry bushes. It’s a delightful place to walk and to think.

The idea for Final Cut came during such a walk. The Woodland Trust volunteers look after the forest, so you can often see piles of trimmed branches rotting away within sight of the path.
Looking at one such pile, I suddenly thought that you could hide a body in there and no one would know. As branches continue to be thrown on, each layer of rotting vegetation would provide  evidence of how long it’s been there. 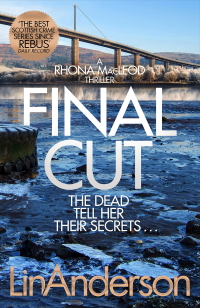 This intrigued me. Plus I had attended a Forensic Soil Science weekend in Edinburgh, where I first encountered Professor Lorna Dawson, a real soil scientist. I was captivated by her lecture on using forensic soil science to help solve crimes. This seemed ideal territory for a Rhona book.
At this point I conceived the opening scene.

It’s midwinter, and Claire is driving home from visiting her terminally ill mother in a Glasgow hospice. Her nine year old daughter, Emma, is in the back and asking if Granny is going to die. Claire is freaked by the visit and by the weather which is turning to snow as she departs Glasgow for their home in the countryside south of the city.

Suddenly the figure of a man appears in front of her on the deserted road and swerving to avoid him, the car flips and ends up in the boggy ground at the foot of the bank. When Claire comes to, upside down and confused, she can’t remember what happened, where she is, or even who she is.

She manages to undo her seat belt in the pitch darkness and stumbles towards the road where she flags down a white van. The driver asks if she was alone in the car, and turns his headlights in that direction.
At that point she remembers what happened. The figure on the road, her swerving, and that her daughter Emma was in the car, but when they reach the vehicle, they find it empty.

The search begins, and thankfully  Emma is found in the nearby forest, sitting next to a pile of offcuts. In her hands, she has a small human skull, which she tells DS McNab is the skull of a child buried in the woodpile… and she thinks there are more.
FINAL CUT - Book Trailer
Having written the opening scene, I then went back to what I’d learned about forensic soil science, in particular relating to the excavation of a concealed grave. For example, items found in the soil at various levels will have been moved around by worm action, which means just because they’re at a certain level, doesn’t mean that’s the era when they were discarded.

I decided at that point that Rhona and Chrissy would find a piece of glass in the excavated soil, mainly because glass is forensically very interesting and unique, depending on where it’s been used.
While researching this in more detail, I discovered that stained glass was even more interesting forensically because of the chemical dyes used to colour the glass. You can therefore trace the glass to its manufacturer. Maybe even to the customer who bought it.

In this way forensic research informs the story and hopefully makes it more intriguing.
So who was the man on the road that night in the snow and why was he there? 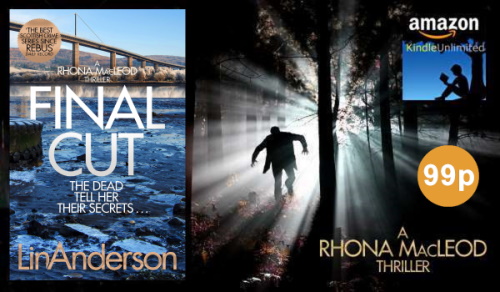